Summary of the United Nations Climate of the Parties (COP26)

With COP27 starting next Monday (7th November) we revisit last year’s COP26, which took place between 31 October to 12 November 2021 in Glasgow, United Kingdom. Attending the 26th Climate Summit, were more than 120 world leaders, who revisited the goals set out in the Paris Climate Agreement six years prior.

What were the goals of COP26?

There were four goals specifically laid out for COP26:

Enable and encourage countries affected by climate change to:

3. Developed countries to mobilise at least $100bn in climate finance per year

4. Work together to deliver on goals

Did COP26 achieve these goals?

The overall outcome of COP26 was met with mixed responses; many did not feel the results were an adequate response to effectively mitigate climate change and surrounding issues.

As stated by the UN: ‘Cuts in global greenhouse gas emissions are still far from where they need to be to preserve a liveable climate, and support for the most vulnerable countries affected by the impacts of climate change is still falling far short. But COP26 did produce new “building blocks” to advance implementation of the Paris Agreement through actions that can get the world on a more sustainable, low-carbon pathway forward.’

However, there were progressive outcomes from COP26, such as the Glasgow Climate Pact: a new series of decisions building on the Paris accord. This included increased efforts to combat climate change and greenhouse gas emissions, providing financial support to developing countries, phasing down on coal power, and aiming to limit global warming to 1.5 degrees above pre-industrial global temperatures.

Another headline outcome was the agreement of the Paris Rulebook, wherein nations agreed on the outstanding decisions on how to implement the Paris Agreement. This included decisions on carbon markets, allowing countries behind on their emissions targets to purchase emissions reductions, and reaching decisions on an enhanced transparency framework for reporting emissions.

Click on each day to read a summary of key takeaways. 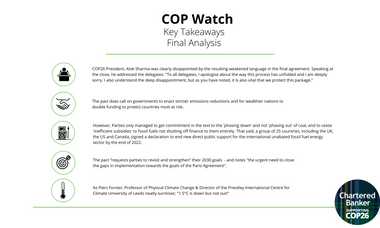 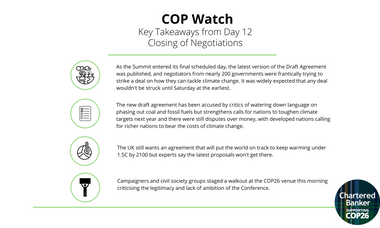 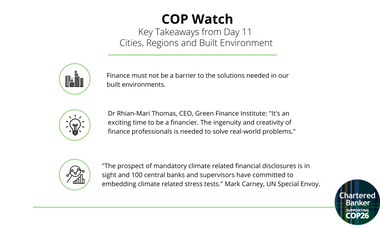 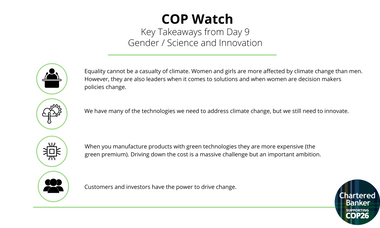 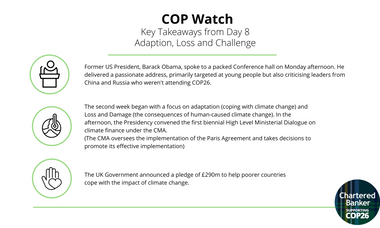 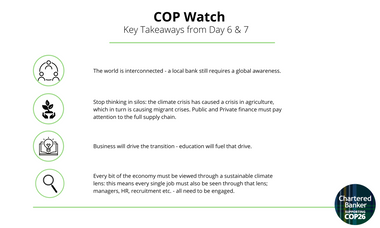 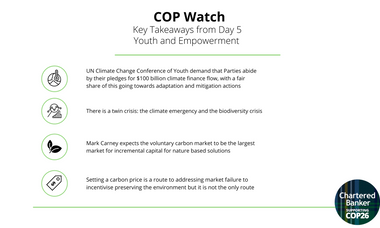 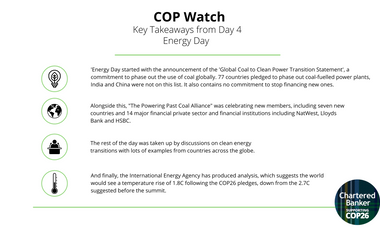 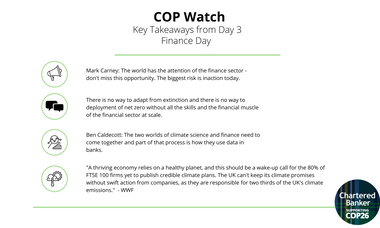 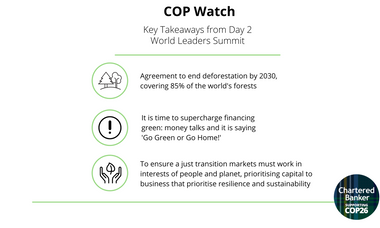 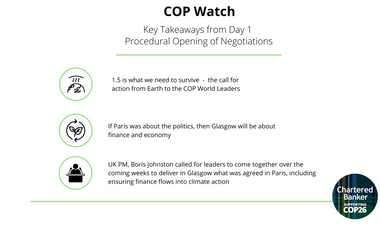 The training courses in the #PRBAcademy have been designed to help banks and bankers implement #responsiblebanking… https://t.co/Uf8CoSeruL

RT @SCQFPartnership: Is that on the SCQF...? The Certificate in Green and Sustainable Finance, from @CharteredBanker Institute, updated for…

Join us for an interactive webcast as we explore the PRB Academy. On 1st February we will offer a live walkthrough… https://t.co/EPkFDf6TcP

By wearing the Green Finance Tartan, you can look good, and do good at the same time. Click below to find out how… https://t.co/KcTm0WTwYM

Join us for our upcoming webcast 'Managing Teams Remotely'. In this chat we will converse about Steve's varied car… https://t.co/OMYNbRr6zK

Applications are open to join our Board of Trustees. We currently have several exciting opportunities for individ… https://t.co/5G7WJDMMsO

Join us for our first webcast in our Career Development webcast series. You will gain a better understanding of… https://t.co/Xd9V6nzsKF

Have you heard about the recently released INTEGRITY Principles? The Principles aim to help finance professionals i… https://t.co/px13g2iGBE

The UN Principles for #ResponsibleBanking are the leading sustainable framework for the global banking community. E… https://t.co/5OLjsMJhXA